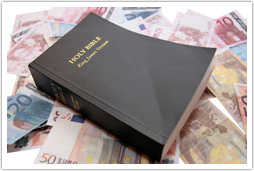 The value of the wealth that Jesus received in the form of gold, frankincense and myrrh that was given to Him after His birth in today’s currency was worth $400 million.

The extraordinary power of Jesus was beyond imagination, as He stopped the wind, calmed the seas, walked on water, raised the dead, healed the sick and restored severed body parts. It has been easy and convenient to overlook the fact that Jesus was above and beyond wealth because He could turn water into wine and multiply the loaves and fishes and actually produce money from the fishes mouth.

The definition of wealth is, “one who is able to obtain what is immediately required.” This would have to be the ultimate in luxury and put one well beyond wealth as we know it.

Could there possibly exist a level of wealth beyond our traditional definitions? Could this wealth if it existed be demonstrated by a man of Hebrew descent who was a common carpenter?

Jesus is the only person in history who qualified for the status of “wealthy”.

Jesus was beyond wealth: 15 points

1. Beyond wealth, because without the liability and obligations of managing a vineyard, or the need to own a winery, Jesus turned water into wine and it wasn’t even his water! Not just wine, but “the best wine” without even paying for it! (John 2:10) He was able to obtain what was immediately required. He was beyond wealth.

2. Beyond wealth, because as an inside trader in the fishing industry, He had prior knowledge in respect to the location and volume of catch that would make any futures trader on the Toronto Stock Exchange a millionaire in 30 days. (John 21:6)

3. Beyond wealth, because of the twelve businessmen He dined with on one occasion, Jesus could predict which ones could not be trusted right down to the time that the betrayal took place, (Matt 26:21) and which of the twelve would deny Him even after publicly confirming a vote of confidence in favour of Jesus’ leadership. (Matt 26:34) Any executive demonstrating such insight into people’s character as Jesus possessed, could easily demand of any multinational conglomerate corporation a “mega salary” to chair their board meetings and they would willingly pay. Jesus was beyond wealth. How often have you said, “if only I knew that was going to happen I could’ve made a fortune!” That “knowing the future” was a normal experience for Jesus. He knew the headlines for tomorrow morning’s newspaper; for next year’s stock prices for that matter. He was beyond wealth.

4. Beyond wealth, because when it came to paying taxes He was able to extinguish His liability simply by having a fish pay the tax for him! (Matt 17:27) Jesus even picked up the tab on His associates tax obligation courtesy of the same fish! In short, He was able to obtain what was immediately required. He was beyond wealth.

5. Beyond wealth, as there is no evidence that Jesus ever paid civil taxes! The approach to collect tax from Jesus (Mark 12:14) by the civil government agents came to an end, as Jesus was able to negotiate a “nil tax liability” status within the state. How much wealthier would your family be today if you had no tax encumbrance on your family assets or income? Jesus was beyond wealth.

6. Beyond wealth, because He could heal the incurable diseases of His day with just a touch. (Luke 5:13) No need for years of laboratory research at the cost of millions…. just one touch. He was beyond wealth.

7. Beyond wealth, because when He wanted to travel into town, without so much as a phone call, He had a donkey waiting that He had never bred, never fed, never stabled, never trained, and He never had to worry about parking when He arrived at his destination! He received a voluntary “red carpet” reception. (Matt 21:7) Jesus was beyond wealth.

8. If “knowledge is wealth,” Jesus tops the list again as surely as His intellect was beyond any known measure of knowledge in the then known world. The intellectuals of His day in open debate marveled at His knowledge. (Luke 20:26, John 7: 14, 15) His reservoir of knowledge clearly silenced His would-be critics and put Himself far beyond any wealth of knowledge they could muster!

9. Beyond wealth, because His Father owns the largest cow ranch on the planet (“He owns the cattle on 1000 hills” Psalm 50:10), in the mineral reserves beyond the biggest publicly traded mining company on Wall Street. (The earth is the LORD’s, and everything in it… Psalm 24:1)

10. Beyond wealth, because although many of the world’s richest people live in a mansion, Jesus’ house contains many mansions, and the main street in His neighborhood is not constructed of asphalt or even stylish cobblestones, but with gold. (Rev. 21:21)

11. Beyond wealth, because just a cursory glance at his miracles confirms that He was able to multiply assets exponentially! In the case of the feeding of the 5,000, if we conclude that one person would have eaten half a loaf of bread and one fish, then Jesus’ “food fund” showed a capital growth rate of 50,000% per day (bread) and over 250,000% per day (fish)! No capital growth fund in history can come close to that. At that rate of return, you could give Jesus one dollar on Friday night and over the weekend He would turn you into a multimillionaire! He was clearly beyond wealth. To top it off, Jesus gave it all away, and it didn’t diminish His asset base one bit!

12. Beyond wealth, because Jesus was a unique dresser, as one discovers He wore the clothes of one who shopped the finest stores. So much so that after his assassination, rather than cut up His coat and divide it four ways as a souvenir, the soldiers decided to draw straws for this trophy and keep this quality seamless garment as one piece, as such a masterpiece of tailoring demanded. (John 19: 23,24)

13. Beyond wealth, as His burial was that reserved for the very, very, rich. In this case, the mega rich merchant, Joseph from the town of Arimathea, donated the tomb that Jesus was buried in. Jesus didn’t even have to pay a dime for the tomb! (Matt 27:60) He had the ability to obtain that which was immediately required, even after He breathed His last breath! Jesus was clearly beyond wealth.

14. Beyond wealth, because “what shall it profit a man if he gains the whole world and loses his soul?” Jesus conquered death.

15. Beyond wealth, because you clearly can’t give what you haven’t got and you can’t lead from behind, so when Jesus’ Father promises to give wealth, He could only do so if He first possessed wealth, (Eccl. 5:19 “Furthermore, as for every man to whom God has given riches and wealth, He has also empowered him to eat from them and to receive His reward and rejoice in his labour; this is the gift of God.”) which He clearly does. You would therefore not be surprised to discover that this same Jesus is able to teach his wealth techniques and multiply wealth to the “apprentices” that follow Him. (Deut 8:18 “And you shall remember the LORD your God, for it is He who gives you power to get wealth, that He may establish His covenant which He swore to your fathers, as it is this day.”)

Jesus was clearly, beyond wealth! (and he is willing to teach it to us)